Policies on climate change need to address both mitigation and adaptation.  An open trading system should be a part of any adaptation strategy.

Thinking about trade in the context of climate change may bring to mind specific forms or aspects of trade: for example emissions trading, or the emissions caused by energy use in transporting traded goods. The Stern Review proposed reducing barriers to trade, not as a general policy but specifically for low-carbon goods and services (1).  What is often overlooked is the potential of international trade in helping countries adapt to reduced agricultural production due to climate change.

Consider a poor country producing and consuming two goods X and Y, where X represents all those agricultural goods whose production may be affected by climate change, and Y represents all other goods.  In the diagram below (2), PPF0 is the initial production possibility frontier. Point S represents the minimum consumption quantities necessary for subsistence of the country’s population.  Within the ‘subsistence zone’ above and to the right of S, social indifference curves SIC represent successively higher levels of welfare above the subsistence minimum. 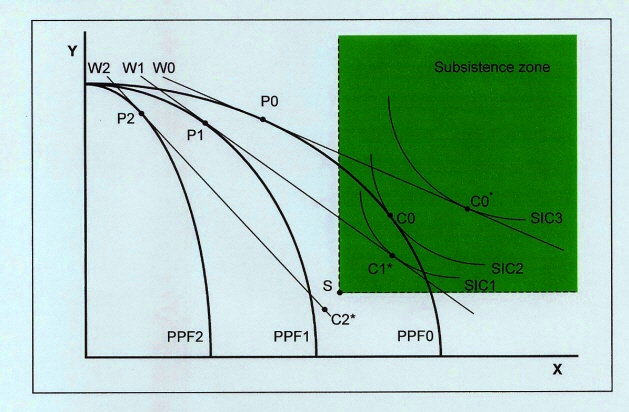 Since PPF0 passes through the subsistence zone, the country could initially subsist without trade, producing and consuming at point C0 where PPF0 touches the highest available indifference curve SIC2.  If however it is able to trade, importing X and exporting Y on terms indicated by the slope of the world price line W0,  it can produce at P0 but consume at C0*, achieving the higher welfare level SIC3 (an example of the gains from trade).  This is important in the context that climate change and its effects are hard to predict with accuracy.  Many approaches to mitigation and adaptation involve the certainty of incurring substantial costs but great uncertainty as to the benefits.  By contrast, open trading involves little cost and yields benefits even if production is unaffected by climate change.

Now suppose that due to climate change the production possibility frontier contracts to PPF1,   passing to the left of S.  The country can no longer subsist solely on the basis of its own production.  If however it can trade on terms indicated by W1,  it can produce at P1 but consume at C1*.  In this case the gains from trade make the difference between destitution and subsistence. There is also a double benefit to other countries: not only imports of Y, but also avoidance of the migration and instability likely to result where a country cannot provide its people with a subsistence minimum.

As the diagram is drawn, W1 slopes down more steeply than W0, implying that lower productivity in X is accompanied by a worsening of the terms of trade.  This pessimistic assumption is plausible since climate change may also reduce production of X in other countries, raising the world price of X (and increased supply of Y may depress the world price of Y).  It is also possible, more optimistically, that climate change could increase production of X in some other countries (making it possible to grow wheat in more northerly regions of Canada and Russia, for example).   However, the case for trade as a means of adaptation does not rest on any such assumption (although if this were so the gains from trade would be magnified).

Given the even more severe scenario represented by production possibility frontier PPF2 and terms of trade W2, it would no longer be possible, even with trade, for the country to achieve subsistence.  Nevertheless, the gains from trade could still make a substantial contribution, enabling the country to consume at say C2*, much closer to S than PPF2, leaving a much smaller gap to be bridged by foreign aid or other means.

There is much that this analysis leaves out.  A country’s production possibility frontier may expand over time with investment and innovation.  Its subsistence zone may shift with population growth.  Its terms of trade may fluctuate.  Notwithstanding such considerations, the gains from trade ensure that a country will be better placed to cope with reduced agricultural production due to climate change if it participates in an open trading system.

This entry was posted in Climate change and tagged gains from trade, trade. Bookmark the permalink.

This site uses Akismet to reduce spam. Learn how your comment data is processed.